The schools here shut down for two weeks over Christmas and New Year’s, and my husband works limited hours and enjoys some vacation days. Since we all were home at the same time, we decided to take a mini-vacation over the holidays. At first, I researched cruises, but found them dreadfully expensive and lacking interesting itineraries. Crossed that option off the list. Next choice, use hubby’s hotel points and spend a few nights away. I wanted a beach resort, but all of those dates were blacked out. So, we turned to Orlando, Florida, home of all things crazy-touristy. But there was a desirable hotel with availability, and it took points. Woo hoo! But, what would Orlando be like this time of the year, one of the busiest travel seasons?

We drove north the day after Christmas, and in three hours, we were in downtown Orlando, no traffic. We couldn’t check into the hotel until 3:00 PM, so we first headed to the Orlando Science Center. Yep, we’re the family who likes science museums. Forget the Mouse and the various theme parks—we do science first. (We’ve also been to Disney many, many times since moving to Florida seven years ago.) What a great museum! It wasn’t crowded, and for less than $19 per person (there are many discounts offered), we enjoyed the entire center, plus movie tickets to the films shown in the Dr. Phillips CineDome. We explored the world of bats, learned about dinosaurs, studied weather patterns, and played engineering games. We watched “Hidden Universe” on the massive CineDome screen, and enjoyed lunch at Subway.

On our way to the hotel, we bypassed I-4 (horrible traffic) and drove through the city. Ivanhoe Village is a charming and quirky arts district just outside of downtown Orlando, and the city itself was clean and quiet.

Our hotel, Gaylord Palms Hotel and Convention Center, is located south of Orlando proper, in the Kissimmee area, which is home to most of the attractions. Gaylord Palms is now part of the Marriott Hotels family (yay, points!), and it is definitely worth checking out. We stayed for three nights in a one-bedroom suite overlooking the St. Augustine atrium. There were palm trees, waterfalls, koi, and a replica of the Castillo de San Marcos. Plus, we could see the Christmas lights and the top of the Christmas tree from our balconies.

The Gaylord Palms has a great outdoor pool complete with a small waterpark. There’s also a spa and a large gym. We ate Sunday brunch at the Villa Rosa, which was excellent. (Our Friday night dinner at the poolside restaurant was okay…and not worth what we paid for it. There are plenty of restaurants nearby on International Drive or Osceola Parkway that serve better food for less.)

ICE! is the holiday ice sculpture show, housed in the convention center. Tickets are around $30 per person (we had a Florida resident discount, and if you go before Christmas week, you can expect to pay about $10 less per ticket) and give you access to the sculptures for a certain time of day. We went Friday at 8:00 PM. After watching a short video about the sculptures’ creation, we donned heavy winter jackets provided by the hotel (the temperature is kept at a frosty 9 degrees Fahrenheit), and walked through the display. This year’s theme was the Nutcracker.

The following day we spent at Universal Studios Orlando, a park new to us. We arrived a few minutes before the park opened, purchased one-day, one-park tickets ($96 per person, plus tax), and hit the rides. The park was not crowded that early, and we knocked out most of the attractions within the first three hours. Some amazing rides: Transformers 3-D, The Simpsons Ride, Men-in-Black Alien Attack. Shrek 4-D and the E.T. Adventure ride were also charming. My husband and older kid rode Revenge of the Mummy roller coaster and found it thrilling. The Terminator 2: 3-D show was a little dated but still fun. The Twister attraction was meh, but the lines for that seemed to stay short throughout the day, even during peak hours. 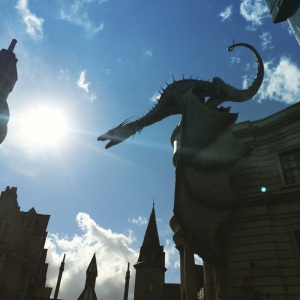 Of course, we braved the crowds, and a nearly two hour wait—the only significant wait we encountered that day—to experience the new Harry Potter Escape From Gringotts ride. Was it worth it? Absolutely. It’s a 3-D roller coaster, with plenty of scary twists and drops for the thrill-seeker, and also with some awesome special effects and exquisite details to please anyone looking for complete immersion in the world of Harry Potter. This was our last ride of the day, and we emerged from Diagon Alley theme-parked out.

We avoided I-4 and went to one of our favorite restaurants, Sea Dog Brewing Co., for dinner. No wait, good food, and cold beer.

Sunday was our final full day of vacation, and we spent it sleeping in, going to brunch, and lounging by the pool. For dinner, we drove a few miles southwest of the area to get inexpensive gas and enjoy a hearty meal at Bob Evans. Back at the hotel, we sipped wine on the balcony and watched the nightly holiday light show.

I wasn’t sure what to expect when visiting the Orlando area during the holidays. There were crowds, yes, but we also arrived at Universal early and experienced minimum wait times during the morning. I imagine that the Disney parks had similar, if not vaster, crowds, but it’s that time of year. Families have time off from work and school; the weather is decent in Florida (highs in the upper 70s, low humidity). People will flock to Orlando. But there are quiet moments: trying out an experience outside of the theme parks (Orlando has plenty to offer) or enjoying some downtime at the hotel. People-watching is great when you’re stuck in the crowds. It’s fun listening to the different languages spoken and observing the interactions within families…dads telling their kids not to whine; moms exhorting their little ones to use the bathroom before standing in line. Somehow, no fights break out, despite the crowds, the waits, and the heat, and everyone mostly respects what little personal space exists.

It’s not magical—nothing ever is—but spending time in touristy area can be enjoyable and relaxing…even over the winter holidays.

The ultimate guide for independent travellers seeking inspiration, advice and adventures beyond their wildest dreams

A Life's Worth of Observations from a Songwriter and Sound Engineer

What Inspires Your Writing?

A blog dedicated to writers...and the people, places, and things that spark their creativity

A book is a revolution

Simple, Thrifty, Healthy-ish food. You only live once, but you eat multiple times a day.

Plus ça change, plus c'est la même chose / The more things change, the more they stay the same

this is not a love story.